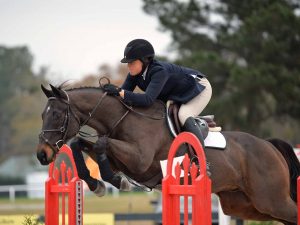 Ashley is entering her sixth year coaching at St. Andrews University.  She worked at SAU from 2009-2012 and then rejoined the staff in 2017.  Ashley coaches both the American National Riding Commission Team and the “A” and “C” Show Teams.  She teaches lessons to both boarders and students who ride in the lesson program while also helping to teach two classes on campus.  Ashley uses the American System of Forward Riding to teach students to be effective and efficient riders.
While at St. Andrews, Ashley’s students have been very successful at local and rated shows, earning championships at many horse shows.  In 2018, the ANRC National Team placed 3rd at the national championship.  Additionally, both the national and novice teams won the written phase at the championship.  In 2019, St. Andrews only had a novice team at the championship but again won the written phase and placed fourth overall.  Ashley is an avid rider who continues to show her horse in the 1.25 m jumper classes while also bringing along green horses.